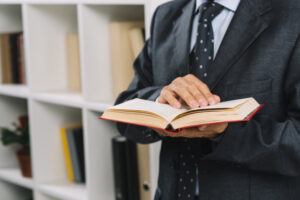 We are proud of the thousands of “quite” settlements and trials we have accomplished; the cases few hear about. But we are also proud of the work we have done to help improve the law for all of Colorado.

Judges of state appellate courts and federal courts authorize official publication of their decisions if they believe the case has public importance and will help judges correctly decide similar cases in the future. These “precedents” are “law” that judges rely on, in their effort to assure that the same legal principles are applied in all similar cases. This helps assure that legal decisions will be rational, equally applied, and (somewhat) predictable. Here are summaries of some precedents that Silvern and Bulger helped to establish.

This is a published federal court decision deciding the defendants’ motion to set aside a jury verdict for our client. It took us twelve days of trial to prove our case, and the jury found that the defendants should pay $660,000 for compensatory damages and additional $775,000 for punitive damages. (For more information on this case, click NEWS CLIPPINGS.) Preserving the trial verdict was most important to our client, but the case is more often cited as precedent regarding the interpretation of Colorado’s “tort reform” laws limiting damages. The Judge agreed with us that under the Colorado law limiting punitive damages to the amount of compensatory damages, the interest on the compensatory damages would be included in the punitive damages. However, the Colorado law limiting “non-economic” damages to a total of $250,000 was applied to the jury’s award for loss of reputation, which reduced our judgment by $50,000. The ultimate result was that a total judgment of $1,380,302 plus interest and costs was entered in our client’s favor.

This case was one of our most difficult challenges. We set a nationally recognized precedent prohibiting insurance companies from concealing significant business relationships with the arbitrators who decide cases against them. Many kinds of contracts, including many insurance policies, require that claims be decided by arbitration instead of regular court trials. The parties to these contracts lose their right to a jury trial. Instead, they must present their legal case to an arbitration panel, which is usually three lawyers. The arbitrators have more power than a judge and jury combined. Unlike judges, arbitrators’ legal rulings cannot be appealed to a higher court. It turned out State Farm was repeatedly using the same lawyers from the same small law firm, to decide numerous cases as arbitrators, and also to testify as paid “expert witnesses” for State Farm in bad faith cases. Mr. Nasca tried his underinsured motorist case to an arbitral panel including one of these lawyers. State Farm had paid several hundred thousand dollars to her law firm over many years. The arbitrators denied Mr. Nasca’s UM claim.

Years after his arbitration, we decided to try to help Mr. Nasca finally obtain justice. The Denver District Court agreed that State Farm violated Colorado’s arbitration law, but State Farm appealed. In a published decision, the Colorado Court of Appeals ruled that the failure to disclose State Farm’s business relationship with its arbitrator constituted “undue means” under the Uniform Arbitration Act.

The Nasca case was very important in reforming arbitrations in Colorado. It also had a national impact. The National Conference of Commissioners on Uniform State Laws cited Nasca in the Official Comments to the 2000 Revision of the Uniform Arbitration Act. The Commissioners cited our case to support their recommendation that the legislation include an explicit, statutory requirement that any arbitrator-party relationship that might indicate bias must be disclosed to the other party. Colorado, and many other states, has since passed this disclosure requirement into law. These days, more cases are decided in “alternative dispute resolution” than by trials in courts of law. We are proud to have helped restore basic fairness to arbitrations in Colorado and throughout the U.S.

At a city park, a rotten branch fell from a tree near a picnic table, injuring our client. The City contended our client had no claim because of Colorado’s Governmental Immunity Law. In Colorado, our politicians have chosen to immunize government employees from being sued for many types of wrongdoing that the rest of us may be sued for. However, in this case, the Court of Appeals agreed with us that governments could be held liable for failing to maintain trees in picnic areas to keep them reasonably safe. Hopefully this precedent will lead to greater attention to the safety of people who enjoy a picnic.

This is an appeal we lost, but at least we drew attention to a ridiculous law. We argued that Colorado’s Governmental Immunity Act violated the equal protection clause of the Constitution because it authorized adult prison inmates to sue for negligence in the operation of jails, but precluded innocent children from suing for the negligence of their care taking institutions (group homes, etc.) The Colorado Court of Appeals deferred jurisdiction of the constitutional issue to the Supreme Court. However, the Supreme Court declined to review the case. Thirteen years later, Steve is still upset about it.

In this ERISA disability case, our client sought disability benefits from the defendant plan which was administered by Aetna.  The court held that Aetna abused its discretion by failing to in any way consider the essential functions of plaintiff’s job. Instead, Aetna simply concluded that plaintiff could do sedentary work without analyzing the actual duties of her job. We argued, and the Court agreed, that where a disability plan defines disability in terms of the claimant’s ability to perform the essential duties of her own occupation, the Tenth Circuit has taught that an administrator is required to consider the claimant’s actual job duties in analyzing whether the claimant is disabled. Bishop v. Long Term Disability Income Plan of SAP Am., Inc., 232 F. App’x 792, 794-95 (10th Cir. 2007) (unpublished); see also Caldwell v. Life Ins. Co. of N. Am., 287 F.3d 1276, 1284-85 (10th Cir. 2002). The Court found that it was n abuse of discretion not to do so, and awarded plaintiff benefits.

In another ERISA disability case, we obtained a reversal of the insurer’s denial of benefits. Reiterating the general rule that Social Security determinations are not dispositive but cannot be ignored, the district court stated that “the weight that a SSA determination will be given inevitably is a case by case determination, affected by such things as the quality of the rest of the administrative record, the definition of disability used by the SSA, the quality of evidence presented to the SSA, the reasonableness of the SSA determination, and other factors that might be deemed relevant in a particular case.” 838 F. Supp. 2d at 1210. The court gave substantial weight to the SSA determination in this case because the quantity of evidence in the rest of the record was thin, the decision appeared reasonable, the plan required the plaintiff to apply for SSDI benefits, and the evaluations occurred roughly contemporaneously, but the plan administrator denied benefits after being informed of the award without waiting to receive the report of the ALJ’s reasoning. Id. at 1210.

Although the appeal was ultimately resolved in State Farm’s favor, we fought hard to limit the scope of the so-called “Absolute Pollution Exclusion” which is often used to deny valid homeowner’s insurance claims.  We argued that the APE should be limited to circumstances of “traditional” or “industrial” pollution and cited cases from other jurisdictions so concluding.

An ERISA long term disability case, in which we obtained a remand for our client (in a remand, the Court orders to defendant-insurance company to conduct a new analysis, and to correct errors in its analysis).  Our client was suffered from end-stage liver disease and cancer.  His long term disability insurance company denied his claim, arguing he was not continuously disabled.  We challenged the decision arguing that the defense:  1.  misinterpreted the polcy;  2.  had mischaracterized our client’s occupation;  and 3.  relied on a flawed medical analysis.  The Court agreed, and ordered the defense to provide our client with a new review.  When the insurance company denied the claim a second time, we went back to Court and argued the insurance company had not fully and in good faith complied with the Court’s order.  The Court agreed again.  These 2 cases are an excellent example of how important it is to have good legal representation throughout the ERISA claim process, and for both the client (and lawyer) to stick with it to the end!

LTD Claim under ERISA, where the insurer stopped paying Long Term Disability benefits after 2o years.  We argued, and the Court agreed, that the insurance company decision was arbitrary and capricious because it failed to account for all of the prior decisions it had made that the insured was disabled.

LTD Claim under ERISA, where the insurance company terminated benefits after almost 5 years, to a former attorney who had suffered a serious brain injury.  The insurance company argued, among other things, that the injury was not adequately proven, and that the absence of “nueropsych” and other testing failed to substantiate the claim. The Court overturned the denial of benefits, finding the insurance company’s decision arbitrary and capricious.  The case is a good example of the lengths insurance companies will go, even disregarding their own prior conclusions, to deny people the help they need.